Does the table top belong to the base?

One of the pitfalls to be avoided when buying antique furniture is buying a ‘marriage’. This is a piece, such as a table, which has the wrong top on it – either from another table or ‘made-up’ especially. Usually this is because the original top has been broken, and obviously makes the piece worth a lot less than one which is ‘right’.

The first way to look for this is to use your ‘eye’. It’s quite surprising how many people don’t stand back and really look at a piece of furniture when they buy. It’s all a question of proportion; the cabinet makers of the Georgian period designed their pieces according to very strict laws of classical proportion, and as a result they are usually very pleasing to the eye: an oval lamp table will have a similarly delicately proportioned tripod base – it won’t be plonked onto four square legs and stretchers. And a sturdy rosewood breakfast table top will need a substantial base to give it stability and make it seem ‘balanced’ to the eye.

The next thing to do is turn the piece upside down [where possible!]. If it is a large table, such as a diner, I often advise people to take a torch to have a good look underneath. The first thing to look for is almost part of the ‘patina’ of the top: if a table has been used for two hundred years or so there will be a waxy rim around the under edge where people’s fingers have touched the table. This is near impossible to reproduce – if the underside is too clean, or there are stain brush marks, steer clear. Something else you often see there are little circular impressions where a ladies crochet clamp has been attached to the edge!

The second thing to look for underneath is anything that shouldn’t be there! In other words, unexplained wear, marks, or empty screw or nail holes that indicate that the top was once attached to something else. Look closely, as these can be quite small, or may have been ‘plugged’ with wood or filler.

Finally, run your hand over the table top: a new top will have a new finish, and will not be smooth and silky to the touch as with original patination; the grain may be raised, or the edges oddly sharp for a piece of age. As with all areas of antique buying, this is where experience counts; but follow your instincts: a piece that simply ‘feels’ wrong often is, and gradually your eye will become tuned in. 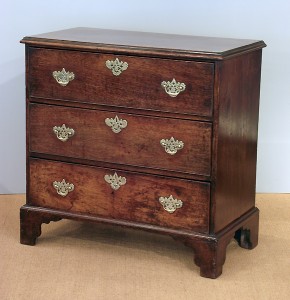 Wood fit for a King