This magnificent table was made in about 1830; style wise, it is typical of the late Regency period: the lion’s paw feet are beautifully carved, with a great depth and clarity. The tulip-shaped carving on the pedestal is a nod towards the symmetrical, foliate designs that became so popular during the reign of William IV, from 1830 to 1837.

William IV was a wonderful period of furniture making. It was characterised by strong, masculine design. Pieces tended to be more substantial than some of the delicate designs from the preceding Regency era; the feet on this table are broadly spread, making it particularly robust – it won’t move when you lean your elbows on it!

Exotic woods such as Rosewood were still popular at this time. The figured top of this table is a spectacular example of the dramatic figure of “Rio”, or South American, Rosewood [named for the smell when it is freshly cut]. A tropical hardwood, Rosewood is very dense and polishes to a lovely shine. 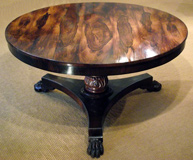 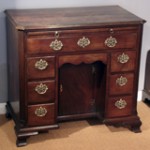