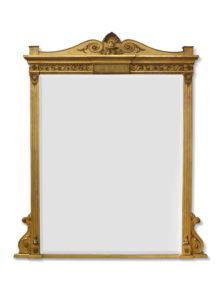 For many years at Thakeham Furniture, we referred to the large (often gilt, often landscape format) mirrors, that hang or stand over fireplaces as ‘overmantle mirrors’… until someone told us this was wrong. The correct, Oxford English dictionary spelling is in fact ‘overmantel’. So that meant we had been calling the mantelpiece the wrong thing for years too!

‘Mantel’ and ‘mantle’ are just one example of many words in the English language known as homophones – words that sound alike but have different meanings; ‘mantel refers to a shelf above a fireplace, whereas ‘mantle’ refers to a cloak or (usually figuratively) to royal robes of state as a symbol of authority or responsibility.

So brief English lesson over(!).. where did overmantel mirrors originate from? Overmantel mirrors, to go above a fireplace, were developed in the mid 1700s, overtaking the earlier, smaller forms. The process of gilding was developed in the later years of the 17th century, the soft gold finish making the mirror a statement piece in the home. The early designs were of Rococo style – highly decorative with carved C scrolls. Overmantels of the Regency period were simple and more refined, often featuring three bevelled plates in a row, divided by reeded mouldings. By Victorian times the fashion was for arched frames, and later, heavy carving reminiscent of the Rococo style.

Overmantel mirrors add a refined elegance to any decorative scheme. They can transform the look of a room, reflecting light and becoming a focal point of a space.