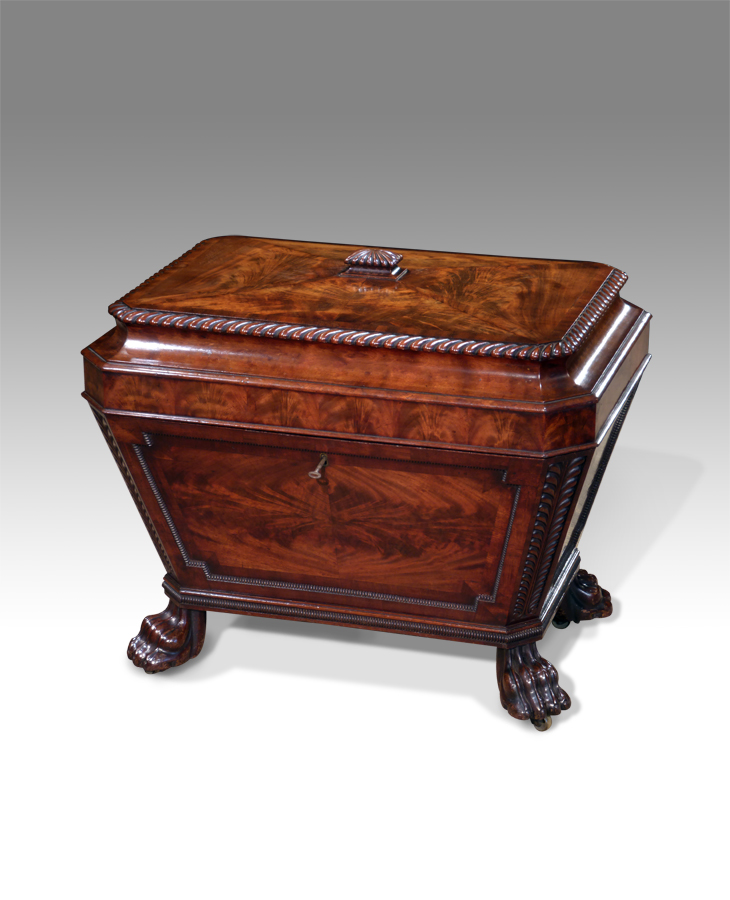 One of the most exceptional pieces we’ve had in recent months is this wonderful Georgian mahogany wine cooler that has just come in to the showroom. It is a classic piece of English cabinet work from the late Regency period – some might claim the peak era of furniture design. Pieces from this date were beautifully executed, with all the skills and knowledge of previous generations of craftsmen put to good use. The mechanisation of the subsequent Victorian period heralded the advent of mass production with a subsequent homogenisation of design innovation.

Of ‘sarcophagus’ design, this wine cooler is in wonderful original condition. Robert Adam wrote that the English were “accustomed by habit, or induced by the nature of our climate, to indulge more largely in the enjoyment of the bottle” than the French. Perhaps this explains the huge diversity, during the 18th century, of types of containers made for bottles – intended to stand in the dining room, generally under a serving table or sideboard.

By the early 19th century there were even cabinet makers who specialised in making nothing else. The terms “cellaret” and “wine cooler” are sometimes not used with any clear distinction, but generally the former had a lid and was used for storing bottles, while the wine cooler, open or closed, was lined and filled with ice for cooling them. This example has never had a liner. It features beautifully figured flame mahogany panels veneered [as in all the top quality pieces] onto straight grained mahogany. Turned “gadrooning” frame the panelled sides and the whole rests on magnificently carved “lion’s paw” feet.