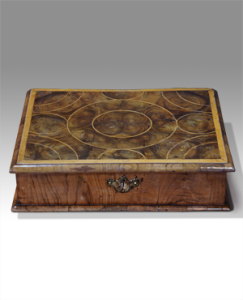 This technique is thought to have been developed by English cabinet-makers in the 1660s, immediately after the Restoration of the monarchy. Many of the finest pieces of furniture during this time were ornamented with roundels or ‘Oysters’ of walnut or laburnum. Oysters, so called because of their resemblance to an oyster shell, are produced from selected limbs (branches) of certain species by saw-cutting across, usually at an approximate 45° angle.

The difficulty came with the seasoning of the cut timber: woods such as these are very likely to split and twist as they dried out, particularly if they were cut across the grain. This cut incorporated both the light sapwood and the dense heartwood, to great decorative effect, but creating conflicting strains during seasoning. The slices of veneer were wrapped in cloth and buried in silversand to dry out as slowly as possible.

The resulting small, oval pieces are trimmed and laid in various patterns on special furniture and frames. The most common species for oyster work are Laburnum, Olive, Walnut and Yew. These were cut from smaller branches of the tree. Transverse saw cuts were made straight through to create roundels, while slices cut at an angle provided ovals, both methods showing the ‘fan’ of the grain to its best advantage. Stringing was a fine inlaid line using a contrast of woods like Holly or Boxwood, as seen in this lovely example – an olivewood lace box, dating from about 1690. 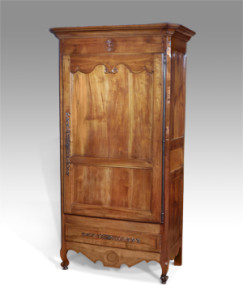 Fruitwood: Where was it used and why?