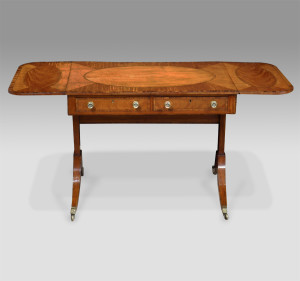 century, along with Thomas Chippendale and George Hepplewhite. He came from a poor background in Durham, and was trained as a ‘journeyman cabinet-maker’. He seems to have settled in London about 1790 in Davies Street, and then Wardour Street, where he taught perspective and furniture design. He published his most famous work ‘The cabinet-makers and Upholsterers Drawing book’ in 1791-4. The designs are fabulous – intricate and detailed, and accompanied by his astute observations on form and proportion. 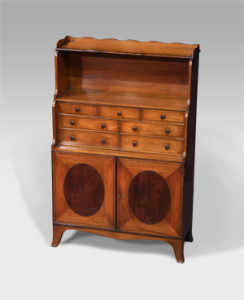 He had a remarkable sense of style, and the designs show lightness and great elegance. Characterised by classical proportions and slim, straight tapered legs that replaced the heavier cabriole legs of the mid 18th century, his furniture featured the use of exotic hardwoods such as Satinwood, Rosewood and Ebony. Common marquetry motifs include drapery swags, ribbons, fans, and urns, but all restrained and elegant. Particularly popular were the inlaid oval panels, as seen on this beautiful sofa table of the period, often crossbanded with Tulipwood or Purpleheart

Interestingly, there is no evidence that he possessed a workshop, or executed any of the designs illustrated in his books. However, his influence as a designer was huge – over 700 cabinet-makers bought ‘The Drawing Book’ and his designs were adopted by makers throughout the Regency period. Replaced by heavier furniture during the Victorian period, the 1890s saw a huge revival of the Sheraton Style, and elegant, restrained Satinwood pieces started to be produced again – such as this exquisite little waterfall bookcase.