Furniture Of The Turner Era

Currently taking place at Petworth house, and running until 12th March is ‘Turner’s Sussex’: an exhibition examining the artist’s work in the county of Sussex. To celebrate this, we have considered here what was happening in terms of furniture design during the Turner era.

Regency furniture is popularly described as the furniture produced in the period 1790 to 1830 – covering almost exactly the period of Turner’s working life. These years produced some of the most inventive and decorative furniture that has ever been made.

The desire for homes built ‘a la mode’ grew increasingly from the late 1700s. The economy was going from strength to strength, opening up new areas for commercial expansion, and heralding a greater French influence in design .It was fashionable for educated people to show an interest in history and an appreciation of the arts; increasing numbers of affluent people undertook the Grand Tour, and, like Turner himself, returned home with eyes educated to appreciate fine art.

The Regency attitude to inter

ior decoration involved treating each room as a unit, with furnishings in harmony of theme or colour. Rooms were designed for a more informal style of living; windows were large and often used as doors into the garden. To fit suitably into these new interiors furniture had to be light and small enough to be easily moved about.

Popular interest in novelty and invention also resulted in the production of pieces with dual purpose: such as these library steps which conceal a commode! 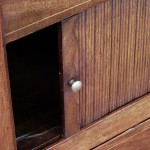 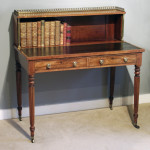