Flame, Burr and Birdseye: A Guide to Figures in Timber

While ‘grain’ refers to the orientation of the fibres within timber, ‘figure’ describes the various distinctive patterns that result from this. More simply put, it is the surface pattern. Many things create and shape a wood’s figure, from the difference in density between earlywood and latewood cells, natural pigments and the number of growth rings; to deformations such as knots and external forces such as tensions and compression. Below are some of the most common examples of figure found on antique furniture.

Flame: Flame mahogany is cut at the crotch; the junction of a branch with the main stem of the tree, producing a flame-like figuring. This is an expensive process, with beautiful results which make it highly desirable within antique furniture.

Fiddleback: A wavy or rippled effect; the name derives from the common use on the backs of violins.

Birdseye: A rare, distinctive figure that most commonly occurs with maple. It appears like lots of tiny eyes in the grain.

Burr (or burl): A burr results from a tree undergoing some form of stress such as injury, virus or fungus. A swirly figure made up of tiny knots, it has the appearance of clustered buds and eyes surrounded by contorted veins and lines. Prized for its beauty

plum pudding: Plum pudding , usually occurring in mahogany, is an irregular grain caused by natural pigmentation from infiltrates. It has a streaky appearance which again is highly rare and desirable.

Wood fit for a King 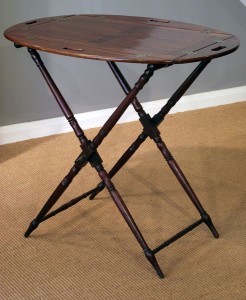