The earliest tables especially designed for playing cards were introduced around the beginning of the 18th century. Such tables were veneered in walnut, and had rectangular folding tops laid with baize, and cabriole legs; these would swing out to support the flap, and were often decorated with carved shells on the knees. The tops sometimes had cylindrical corners dished to hold candlesticks, and wells were provided for money or counters. 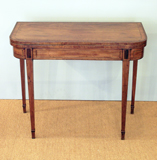 Early in George I’s reign mahogany began to supersede walnut, but the basic design stayed the same, the swing legs being supported by a finely made wooden knuckle joint. Card playing became more and more fashionable throughout the 18th century, and card tables were prized drawing room pieces as the quality of craftsmanship improved.  Between 1775 and 1800 mahogany and satinwood card tables with tapered quadrilateral or cylindrical legs were made in a variety of shapes – serpentine, circular or oval; or D-shaped, as in this fine example from about 1790, inlaid with kingwood and satinwood banding and boxwood stringing. 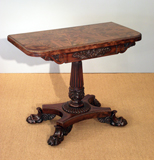 Throughout the Regency period, designs became more elaborate, with quatroform bases and up to four pillars supporting the top. This example, dating from about 1835, is typical of the William IV period, and shows the development from the earlier type. It is of pedestal design, in wonderfully figured mahogany with turned knulling and beautifully carved lions paw feet hiding the castors. This form of table also has a folding, baize-lined top, but instead of a supporting leg the whole top swivels on the base before folding out.