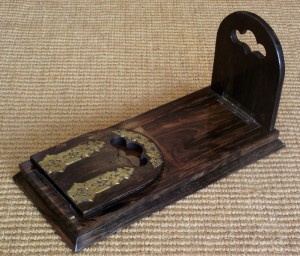 Coromandel wood, sometimes known as Calamander, is one of the most decorative hardwoods used in cabinet-making. It is a variety of ebony, Diospyros macassar, or Macassar ebony, from India and South East Asia, with the most dramatic colouring: hazel brown interspersed with black or charcoal grey stripes.

Ebony is an exceptionally dense, heavy wood, which takes an especially long time to season. Notoriously hard to work, it quickly blunts tool edges; it can be brittle, which is why it was often used in veneer form rather than in the solid. It was valued not only for its beauty, but also for its beautiful smooth surface, and its resistance to shrinkage and warping.

First imported to the Low Countries in the 17th century, ebony was occasionally used for veneering cabinets and mirror frames. Then, at the end of the 18th century, with the advent of Sheraton and his elegant, decorative designs, it became popular as an inlay, giving a dramatic contrast to mahogany or satinwood in the form of stringing or banding. Very occasionally used in the solid to make chairs, it remained a favourite of the Regency period, lending itself to the exotic and precisely detailed furniture of the day.

As ebony was so rare and expensive, by the 19th century a method was developed to imitate ebony, known as ‘ebonising’. The black stain was obtained by boiling log-wood in vinegar, brushing on to pear wood and then applying a solution of oak gall [used in the preparation of ink] and copper vitriol. It looks very convincing, but is easily detected by the modern restorer: the acid corrodes the pear wood over time and it quickly crumbles to dust when touched with a chisel!

The Victorians particularly liked the flamboyant colouring of coromandel, and used it occasionally, for fine, expensive pieces, in the solid – as in this unusual book slide, dating from about 1870.

Run of the Mill? 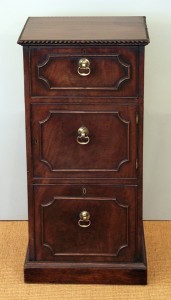