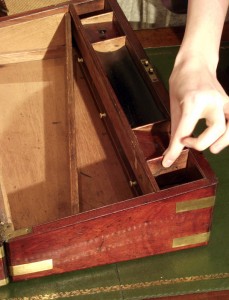 Nowadays most of us keep our money in the safety of bank accounts and our valuables in safety deposit boxes, however these only came into existence at the turn of the nineteenth century. Up until this point, people had to make do with concealing their money and valuables within their furniture.

Items such as desks, chests and tables, were all adapted to cleverly conceal our ancestor’s possessions, anything from jewellery and cash to important documents such as deeds and wills. They came in the form of false-bottomed blanket chests, hollow table legs and hidden drawers. This was not only to deter intruders, but also the prying hands of greedy servants! Secret compartments are evidence of the genius skill cabinet makers possessed.  It was the Italians who popularized this idea in the late 16th century and passed it on to the English and Americans.

The most common use of the secret compartment was in desks, or bureaus. Within a bureau, this might be a small section, a grouping of pigeonholes and small drawers with or without a front. Such a section is an inch or two shallower than the pigeonholes and drawers on either side; it then pulls out as a unit. It’s all about knowing where to look! There are stories of collectors owning items of furniture for several years before discovering secret compartments.

This nineteenth century writing slope has a secret compartment concealed beneath its ink and nib trays. It is a spring and click device, which releases its cover when the small divider is pulled upwards, to reveal three small drawers. 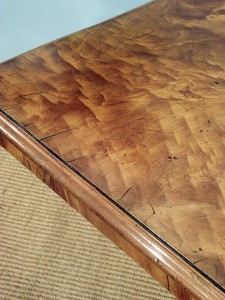 How To Cure Blisters: Repairing veneers