The earliest forms of desk were portable boxes with a hinged “slope”, or lid, for reading or writing. These then developed to the later forming the 17th century which rested on a stand with commonly turned or barley twist legs. Then came the development of larger pieces of furniture with drawers below and a fall –front revealing small drawers and pigeonholes – the “escritoire”. From about 1680 these became the bureaus we know today, in which drawers and a writing slope are combined. 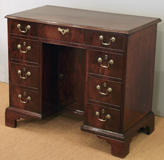 An early form of flat-topped desks were known as “kneehole”, with one long drawer over an arrangement of small drawers either side of a recessed cupboard. This early style was often made in figured walnut, and continued to be popular in mahogany well into the 18th century. They are often beautifully made pieces, and much sought after today because of their small size and useful drawers. 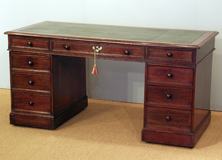 From these, the “pedestal” desk was first developed – commonly made in three pieces, with two pedestals with plain plinth bases and drawers surmounted by a three drawer top, inset with a tooled leather. An antique partners desk is of the same design, but larger, and has drawers or cupboards on both sides so two people can use it at the same time. They have the advantage of lots of drawer space. Good quality pieces will have oak or mahogany drawer linings.