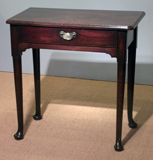 Amongst new pieces this week is this lovely 18th century side table in Cuban mahogany, dating from about 1740. It is typical of the period, with its beautiful simple lines emphasised by a single handle. How did the mahogany get here?