Walnut was the most popular cabinet timber during the first quarter of the 18th century. Much prized by cabinetmakers for its strength and decorative figure, “Juglans Regia” or English walnut, was not in fact native to England, but was introduced from Europe, possibly by the Romans.

On this lovely chest on stand, dating from about 1740, the drawer fronts have been “quartered” – where four consecutive slices of veneer are laid out to mirror each other. These are framed by “featherbanding”, when two lines of banding are laid in a herringbone pattern. Oak or, as in this case, pine was the timber of choice for carcasses, as its strong tight grain provided a perfectly stable ground to support the fine veneers.

This lovely, faded “honey” colour is typical of an early period walnut piece. 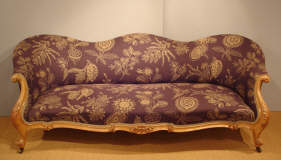