During the 18th and 19th centuries fruitwood was widely used for the construction of vernacular or “country” furniture in England.

The most commonly used fruitwood was the timber from the native or wild cherry, Prunus avium, which produced a decent sized trunk and fine, wide planks. The wood is of a close, firm texture and reddish colour, and cabinet makers were drawn to it for various reasons; firstly, availability: a ready supply of locally produced timber. It is also very easy to work: the grain is fine and smooth, light in weight yet stable, and relatively free from knots. It holds a finish well; whether originally oiled or varnished, it acquires a lovely silky sheen over the years.

Another factor was its reddish colour and superficial resemblance to mahogany. At the time mahogany was a very expensive imported timber, only used on the finest “town” pieces; cherry was often used instead, such as in this delightful glazed corner cupboard, dating from about 1800. A country piece made in the “style” of a much grander one, it has a lovely, mellow colour and waxy finish.

Different types of fruitwood are notoriously difficult to distinguish from each other. Pearwood is strong, heavy and fine in grain, tinged with red. It was used from a very early period for simple country furniture. Stained black and polished or varnished, it was also used to imitate ebony as stringing and inlay, and in 18th century bracket clocks. It is the only fruitwood to display “fiddleback”, the curious crosshatched figuring that was traditionally used on the backs of violins.

Apple is pale and hard in texture, sometimes speckled with tiny knots; plum was also occasionally used, a pale cream when fresh, turning to a reddish brown – quite similar to cherry.

Amongst new stock this week is this lovely 19th century mahogany chest of drawers. Dating from about 1825, it is a particularly fine example of campaign furniture, designed to be packed and carried on the march during military campaigns. The officers of the British army who bought and commissioned campaign furniture came from the upper classes and were used to a certain standard of living. It was unthinkable to live otherwise whilst “under canvas,” as the expression went.

The items had to be relatively easy to pack up and transport. “The history of campaign furniture is the social history of the British officer class,” says Nicholas Brawer, an independent curator, in his book British Campaign Furniture: Elegance Under Canvas. “Mobility was much less a concern than keeping up appearances.”

Just as Savile Row tailors made the officers’ uniforms, England’s leading furniture makers produced campaign furniture that was fashionable and of the highest quality. Firms like Chippendale and Hepplewhite were early manufacturers of the furniture. At first, woods such as walnut and mahogany were utilized. As the empire expanded, more exotic woods such as camphor and teak found their place in campaign furniture. Design was both functional and elegant, with brass edges protecting vulnerable corners and recessed handles that lent the furniture a neat, almost nautical appearance.

This piece is slightly unusual in that it doesn’t come into two halves. It has lovely quality recessed handles, and little brass bound peg holes in the top where a wooden gallery could have been attached to stop items sliding off. The drawers are all oak lined, which was a sign of quality – cheaper pieces would be pine lined.
The elegant turned feet are again typical – on some pieces they were attached by screw
thread, so that they could be removed for transportation. The proportions are particularly
elegant and the piece has a lovely wax patina. 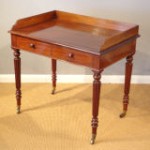 lity mahogany side table, dating from about 1840, is stamped ‘Gillows’. Gillows of Lancaster was established by Robert Gillow in 1728 and continued by his two sons. They were a unique firm: no other cabinet makers were in business for so long a period, and no other provincial firms had a showroom and workshop in 18th century London; they were responsible for some of the finest pieces of English cabinet work during the late 18th and early 19th century. They had a wide range of clients, from aristocracy to the merchant classes. All designs were practical and of the best materials, and above all was the quality of craftsmanship: two hundred years later drawers still glide in and out smoothly. The attention to detail in this table is wonderful; the reeded legs are crisply turned, and the drawers reveal a typical Gillows touch: instead of the back edge of the drawer bottom being nailed up into the back, canted slots have been made for the screws, to enable the timber to shrink without the drawer bottom splitting. Extending dining tables were a Gillow invention, and inventiveness and ingenuity characterised their work; the Gillow Archives 1728-1931 are the largest and longest cabinetmakers’ records to have survived in the world.

This lovely 18th century mahogany drop leaf dining table that has just come into the showroom is exceptional in design and quality. The drop leaf style of table developed from the more cumbersome gateleg dining table during the second quarter of the 18th century. This example dates from about 1740 and is made from Cuban mahogany, the very dense, fine quality mahogany used in the early 18th century, and sometimes erroneously described as “red walnut”. It has a wonderful, silky patina.

What marks this table out as unusual is the beautifully executed cabriole leg, and the hoof foot, which includes a carved fetlock behind. This type of foot is not often seen on English furniture, although the design is an extremely ancient one, going back to Egyptian and Roman furniture. It is also known as ‘Pied-de-biche’, a French term meaning deer’s foot. 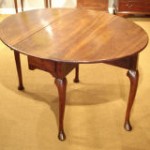 Being only 46” by 38”, and with the choice of having either one or both flaps up, this makes a lovely centre table, or an ideal dining table for a small house.

Amongst new stock this week is this lovely pair of walnut, cabriole leg sofas. As with all antique furniture, pairs are particularly hard to find, and hold intrinsically more than double the value of a single item. These date from about 1880, and are typical of that period in various ways; the Victorians particularly admired the work of the 18th century cabinet makers, and based many of their designs on them. These settees echo pieces from the Queen Anne period [1702 – 1714] in the use of walnut, which was the main cabinet timber of the day, and the shaped, or ‘cabriole’ legs. This is a French term meaning ‘bound’ or ‘leap’; the shape was adapted from an animal leg and was popular throughout the 18th century.

These sofas are typical of the period in which they were made, in that they are beautifully and strongly constructed, with sturdy beech rails under the upholstery. They are in lovely condition throughout, and we are offering them for sale as they are, so that you can choose your own fabric. The price includes the cost of reupholstery by our master upholsterer Louis, but excludes the cost of the fabric. Contact us to find out how much fabric you need; we have a good selection here at the showroom if you need help choosing. 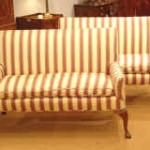 The finish, or ‘patina’ of a piece of antique furniture is crucial. Here at Thakeham Furniture we specialise in preserving the original patina as much as possible; not only is it intrinsic to the value, it is often a great part of the beauty of a piece. Years of  polishing with  beeswax builds up a lovely soft sheen and includes the marks and stains of its life. Sometimes we find the outline of a little pair of embroidery scissors!

Occasionally, if the original finish is beyond repair, we do French polish, but most of the furniture that comes into our showroom just needs a good clean and a wax. We use a beeswax-based antique wax made by Harrells, and, surprisingly, old boot brushes to apply it. If the bristles are soft enough not to scratch leather they won’t scratch the furniture!

At home, maintaining a good finish is simple. The most important tools are any good quality beeswax polish available from a hardware shop and elbow grease! Above all, avoid using any spray polishes, as most of these use silicon as a propellant which will wear through the patina. You don’t need to wax very often – every 3 to 4 months is usually plenty, depending on how much wear the piece gets. Waxing too often will give a sticky finish which attracts dirt. Apply a thin layer with a cloth, then buff up really hard with a soft cloth or brush. If using Harrells wax, which we do sell in the shop, ignore the instructions to leave the wax to dry!