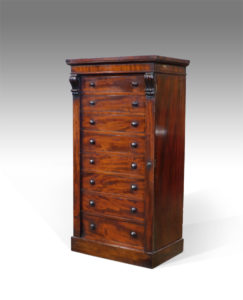 Amongst new stock this month is this William IV mahogany Wellington chest. Dating from around 1830, it’s constructed in lovely quality mahogany, and consists of eight drawers, fitted with original turned wooden knobs.

Named after the 1st duke of Wellington, The Wellington chest is one of the most famous pieces of campaign furniture (furniture specifically made to break down or fold for ease of travel). Consisting of six to twelve shallow drawers, they were often used for storing coins or documents or other small articles. A hinged flap overlaps the drawers on one side and is fitted with a lock. (Wellington chests are sometimes referred to as side locking chests for this reason)

The 1st Duke of Wellington, Arthur Wellesley, was commissioned as an ensign in the British army in 1787. He later moved through the ranks to colonel in 1796 and then governor in 1799. It’s said that Wellesley carried a specific chest with him when in the field, a campaign style piece, with brass mounts to protect the corners, and a locking bar to hold the drawers in place.. it’s thought that this is where the inspiration for the first Wellington chests came from.

Loudon’s Furniture Designs from the Encyclopedia of Cottage, Farmhouse and Villa Architecture and Furniture illustrated the first example in 1833, and Wellington chests continued to be made in the Victorian period in mahogany, walnut and rosewood.