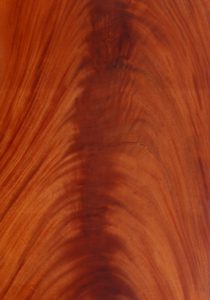 The fork of a mahogany tree for “flame”, or the curly “burr” found near the roots of walnut trees, form especially beautiful grain. Wide planks of this type of wood tend to warp and curl, so the technique of veneering allows it to be glued to more stable wood with less attractive grain, for results that are beautiful and durable.

Veneering consists of gluing down sheets of thinly cut decorative wood to a solid “carcase” timber. Before the introduction of machinery, all veneers were cut with a hand saw: the earlier the piece, the thicker the veneer. The carcase wood would be “toothed” with a toothing plane with a serrated iron, to achieve a good surface for the glue; while the glue dried, the veneer would be held in place by a heated caul, or block of wood. Smaller areas, such as crossbanding or inlay were often laid with the use of a veneer hammer.

The first veneered furniture used predominantly walnut, but also “oysters” of laburnam or mulberry wood; these were made from cutting cross sections of branch wood. During the 18th century “flame” or “curl” mahogany began to be used extensively as a veneer, such as seen on this lovely bookcase cabinet. Other exotic hardwoods were employed at this time, such as rosewood and satinwood, and veneers continued to be popular until the Edwardian period.