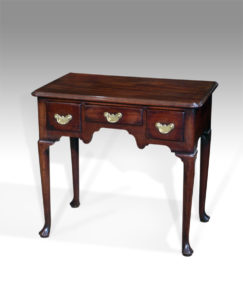 For the cabinet makers of the time, used to working in oak and walnut, mahogany was a revelation: the tree’s girth allowed for wide boards with a straight, fine, and even grain. Its reddish-brown colour darkens over time, and displays a beautiful figure and sheen when polished. It has excellent workability, and is very durable – craftsmen could achieve fine, delicate carving and fretwork, as well as sturdy joints. Mahogany also resists wood rot and, unlike oak or walnut, is never attacked by woodworm.