Marquetry is the m 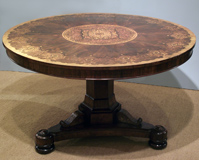 ethod of decorating the surface of furniture with a panel of veneers. The sheets of veneer are temporarily glued together into a “pack”, and cut with a fine saw, producing contrasting panels of identical design. Woods used were usually the more exotic timbers such as ebony, rosewood or boxwood. Some were dyed, and portions of the design, for example the leaves, were shaded by scorching the edges in hot sand.

Amongst new stock this month is this lovely antique rosewood table dating from about 1850. The beautifully figured top features a boxwood banded central roundel, inlaid with intricate marquetry scrollwork designs in satinwood, and other exotic timbers. The base is of architectural form, and features further marquetry detailing on scroll brackets, with turned paterae and bun feet.

This table is typical of the Renaissance Revival style popular during the mid 19th century. The style, first popularised in architecture by Charles Barry and others, was characterised by severe, architectural forms enlivened by elaborate ornamentation in colourful contrasts of materials, and an eclectic use of decorative motifs.